what’s on my desk

Every now and then one of my nieces sends me images of old blog posts and she has been asking me to add something new for awhile. So, at her request here is a what’s on my desk post. 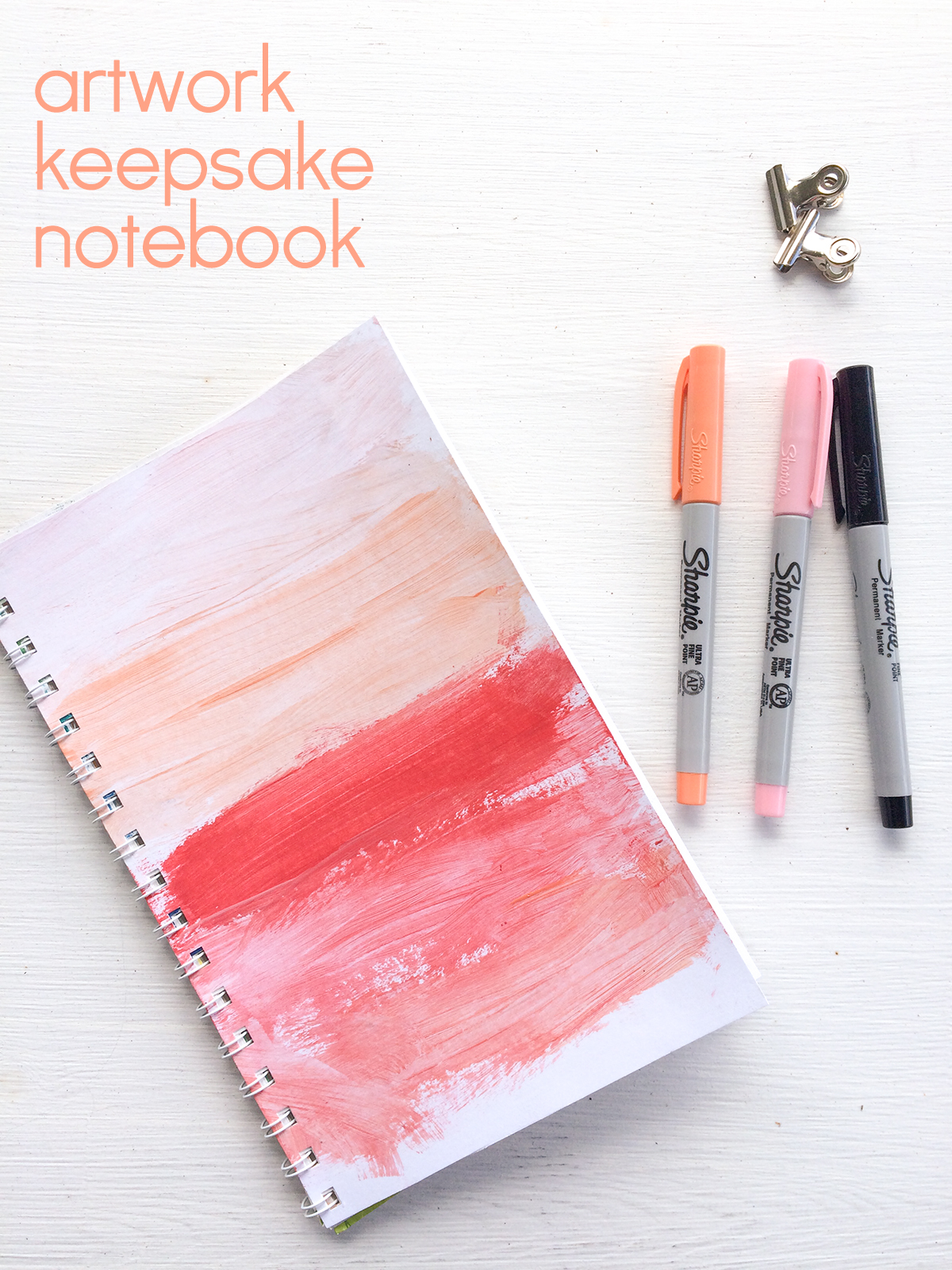 A year or so ago my niece made lots of simple paintings that she hung up in my workroom for an inspiration wall. I loved looking at them everyday, but it was time to take them down. Instead of putting the pieces in a recycle bin or shoving them in a drawer I decided to bind them together into a little book.

The book is supper simple to make (especially if you have access to a binding machine).
– Make sure all of the pages have a straight edge for the binding to go on.
– Decide on a size for the notebook (Mine is about 8.5″ x 5.5″). All of the paper my niece used was from scraps so I had to do a little bit of trimming. Some pages are smaller, but I like the layered look in the book.
– Choose a cover (make sure it’s one of the largest pieces) and cut some chipboard for a back.
– Add holes and binding to make the book. I have a binding machine so I was able to do this myself. If you don’t have one your local office supply store or FedEx office can do this for you. There are some craft binding machines you can get on amazon if you plan on making more books. I haven’t used them, but if I didn’t make notebooks for a living I’m sure I would get one. An alternate binding option is to get binder rings and punch 3 or so holes in the pages and make a loose notebook. They come in plenty of colors and sizes.


Initially the book was curling up a bit so I placed it under some heavy books and overtime it has flattened itself some. There’s still a little curl, but nothing crazy.

Right now the book is in one of the piles on my desk and it’s fun to flip through every now and then. I’m hoping I get the chance to make more books from my niece’s artwork in the future. 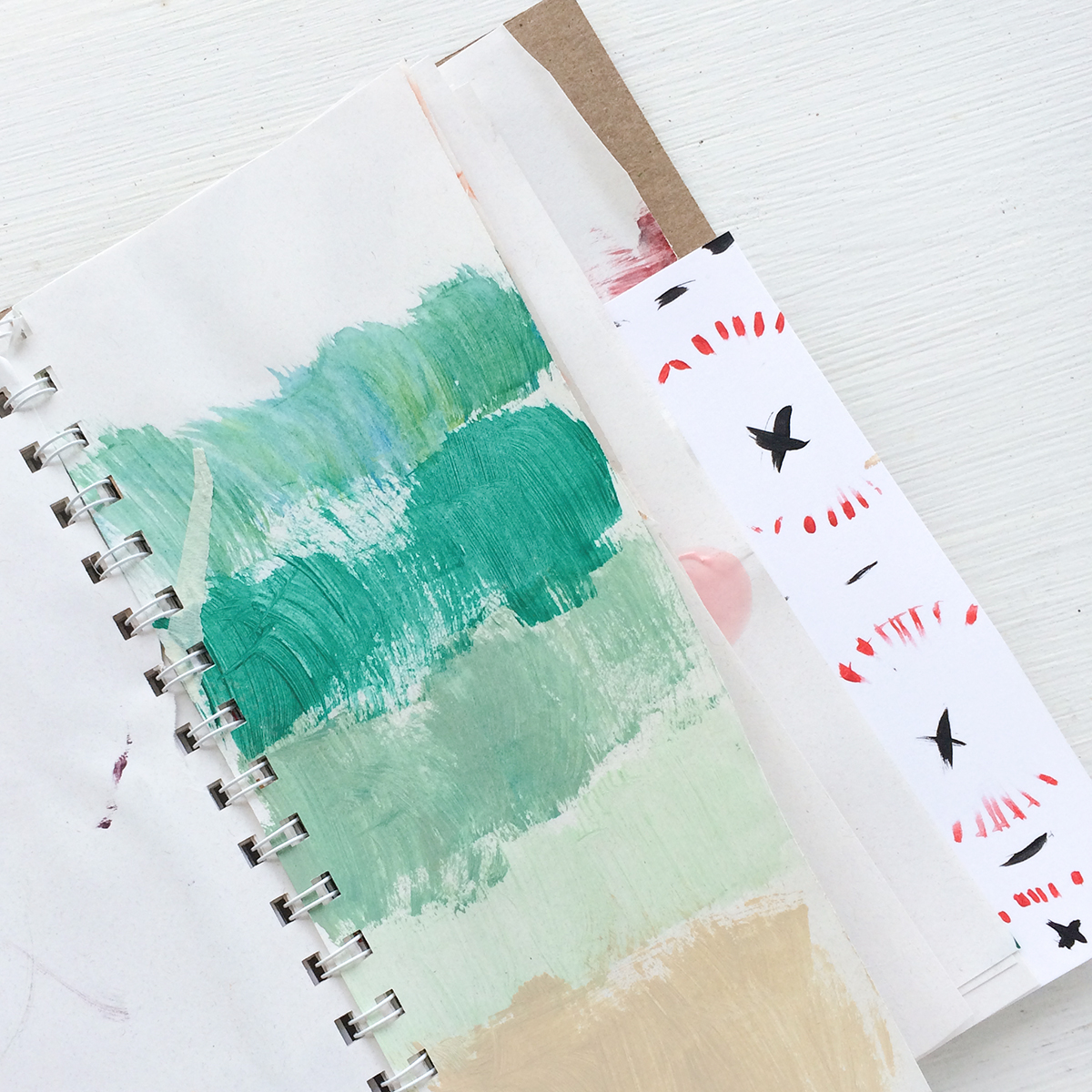 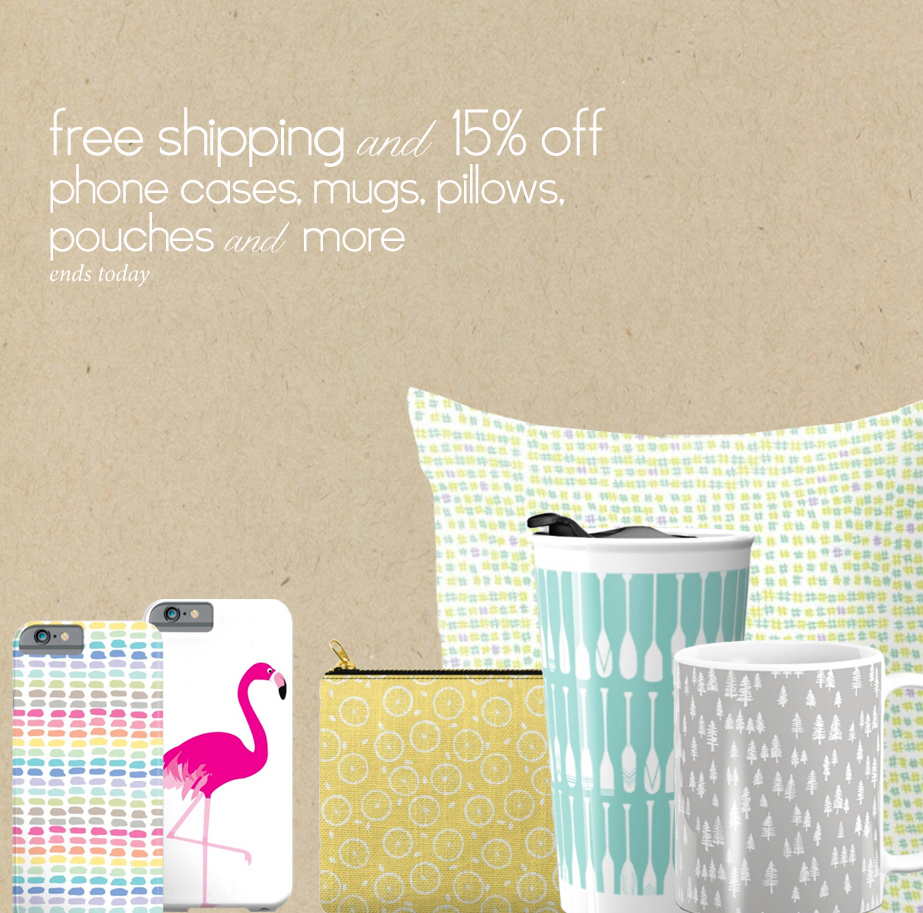 hop on over to the Letter C design Society6 store and save 15% off and free shipping today. i’m extra excited about some of the designs there because they are a collaboration with my niece! There’s more on the way, but the hashtag and flower tops are her first patterns.

here’s a quest blog post from my niece. she came up with this project for a road trip down the east coast she was about to take with her family. 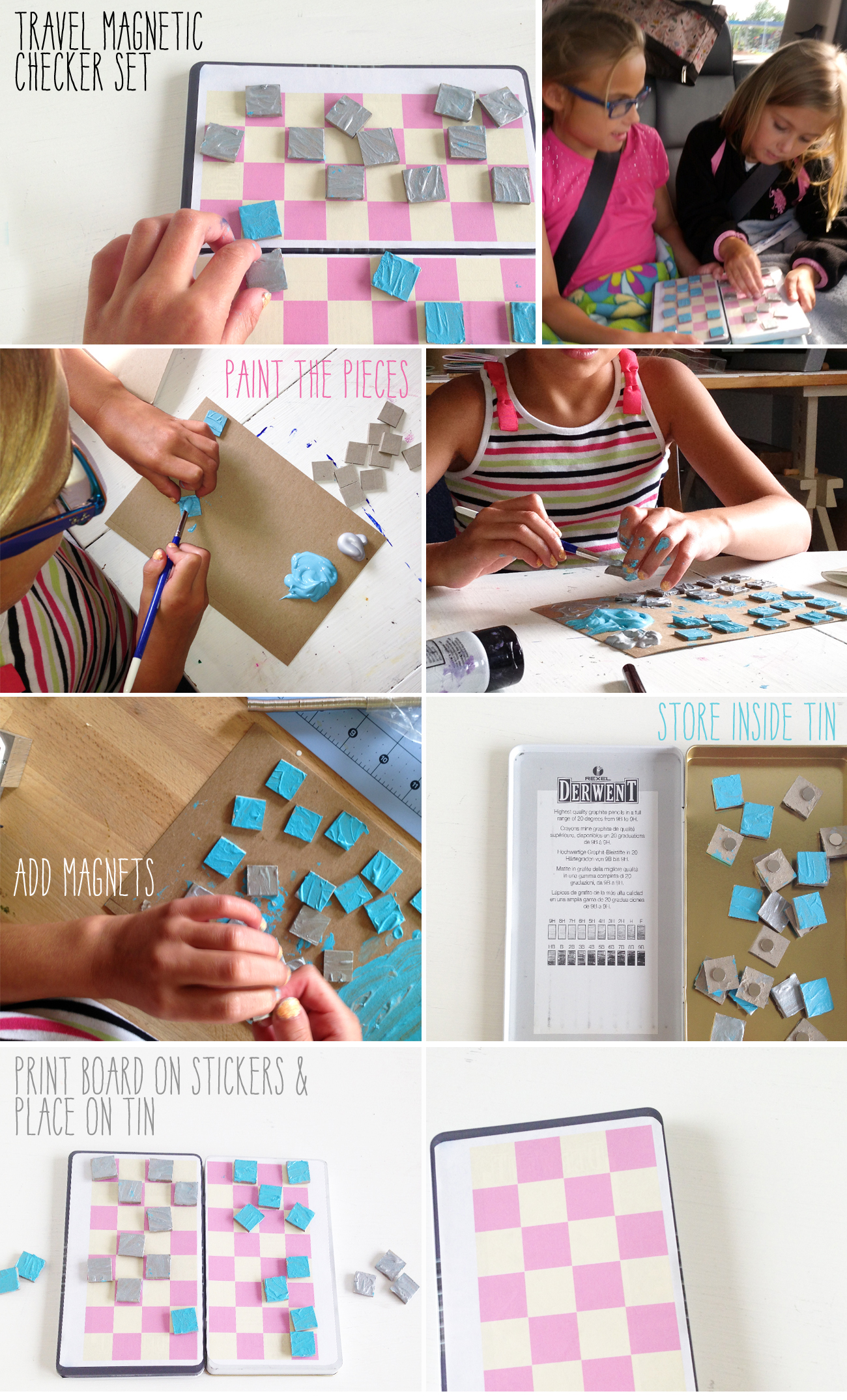 so i am going on vacation and aunt cindy and i were wondering what we could make to do in the car. i thought of a magnetic checker board.

we took some left over heavy chipboard and made squares. i painted them in two different colors and tapped a magnet on the back of them.

we found a metal case that used to hold pencils from when aunt cindy was in collage. we printed out a sticker that was in checker board form and stuck it to the outside of the tin. when your done with the game, you open the case and put the pieces in it.

this game is good for the car and the beach too because when you turn the board over the pieces will not fall. i know a checker board is black and red, but i love to be colorful!

i’ve said it before, but every time one or more of my sister’s kids sleep over i offer to make something good for breakfast – waffles, omelets, baked oatmeal, hash browns … doesn’t matter what choices i give them – they always want pancakes (even these little guys are actually pancake batter cooked in a waffle shaped skillet).

last week when my niece slept over i was trying to think of how i could mix up the normal pancakes for breakfast routine. my first thoughts were to make them a shape or maybe more crepe like, but then i remembered about the aebleskiver pan i bought on a whim a little while ago. not sure why i put it in my cart, but the next time i checked out i decided to keep it in there. i don’t know why. i have amazon prime. i didn’t need to spend more for free shipping.

aebleskiver are basically little dough balls originally from denmark. the name translates to “apple slices”. there were no apples used in the making of these. they do take some time to make, but are a nice addition to my breakfast options. the dough is more waffle-like than pancake-like so the balls were a little crisp on the outside and light and soft inside. next time i think we are going to try making stuffed aebleskiver. 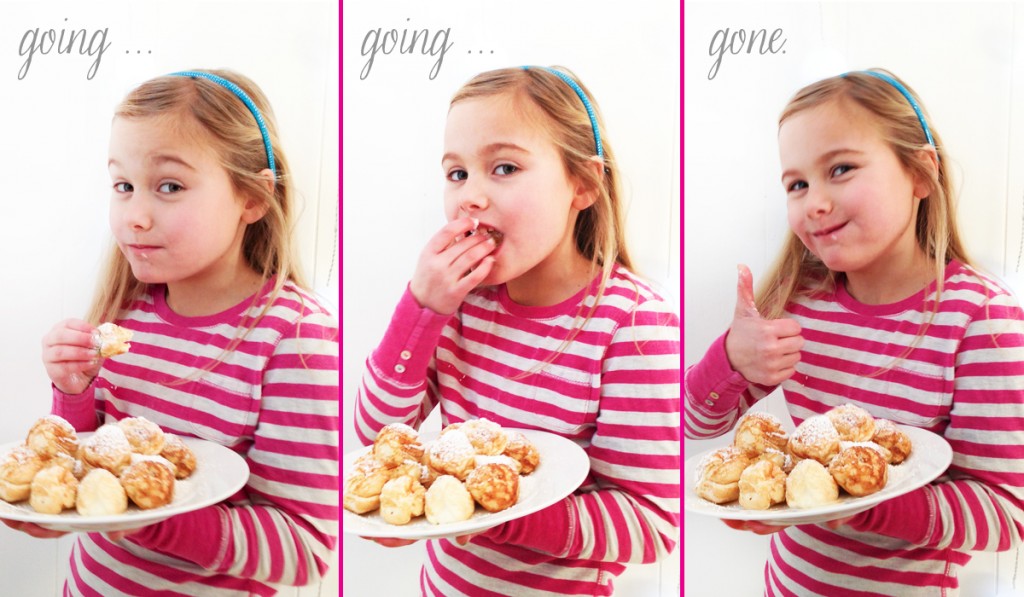 the recipe i used is a combination of one i found here with the recipe that came with the pan.

separate egg whites and yolks. beat egg whites in an electric mixer until soft peaks form. while the mixer is going start the rest of the batter. combine flour, sugar, baking power, cinnamon and salt. then stir in milk and egg yolks. once the whites are done gently fold them into the batter.

heat the pan over medium high heat. brush with holes with melted butter. fill each hole about 2/3 full of batter. cook a few minutes. take a skewer and run it around the edge of each ball. if the ball easily moves, rotate it a bit. i was using a skewer and a fork. you’ll end up rotating each ball about 4 times until each side is cooked. it’s a labor of love.

once the balls are done take them out of the pan. they say eat them right away, but we ended up putting them in a 250 degree oven while we waited for my mom and my other niece to join us for breakfast.

my nieces were hanging out with me in my studio today since there was no school. for a little project we came up with these dry erase picture frames – simple to make and tons of fun. 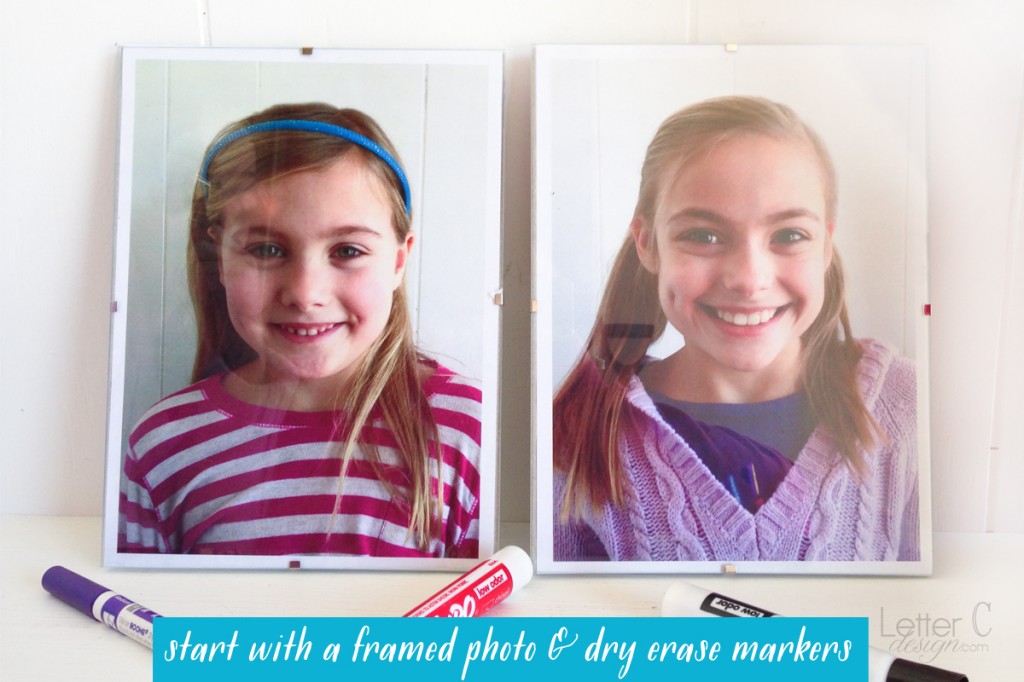 start by taking a photo (these are from my phone and printed on a laser printer – a high quality photo is not need here), cut it to size and place in a simple and inexpensive glass frame. 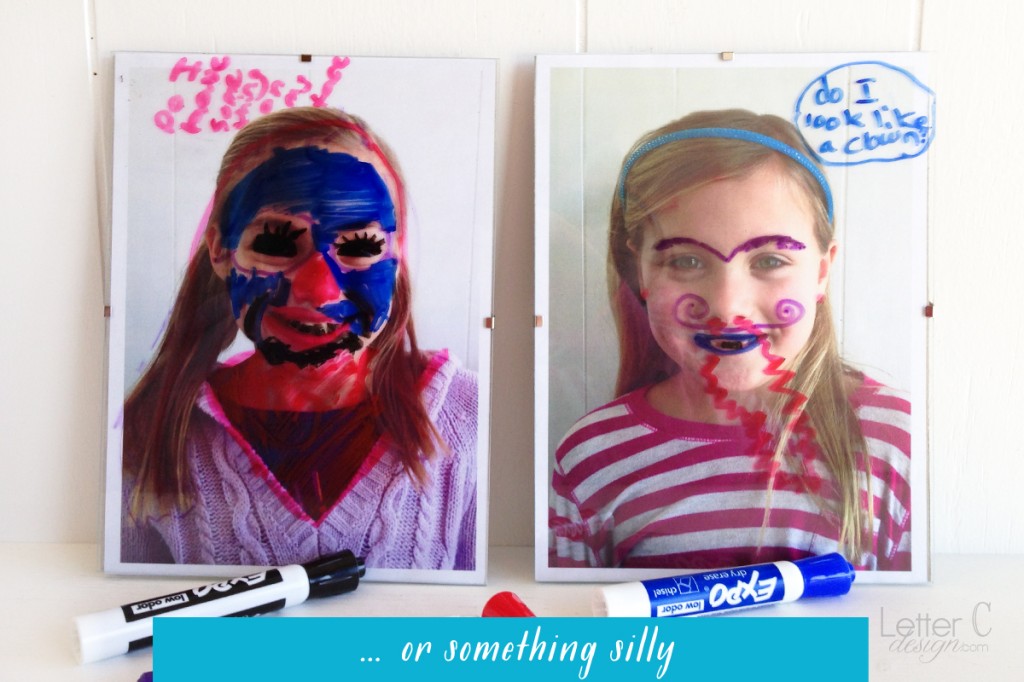 then just draw on them with dry erase markers. add mustaches, silly hair, make up or anything else you can come up with. 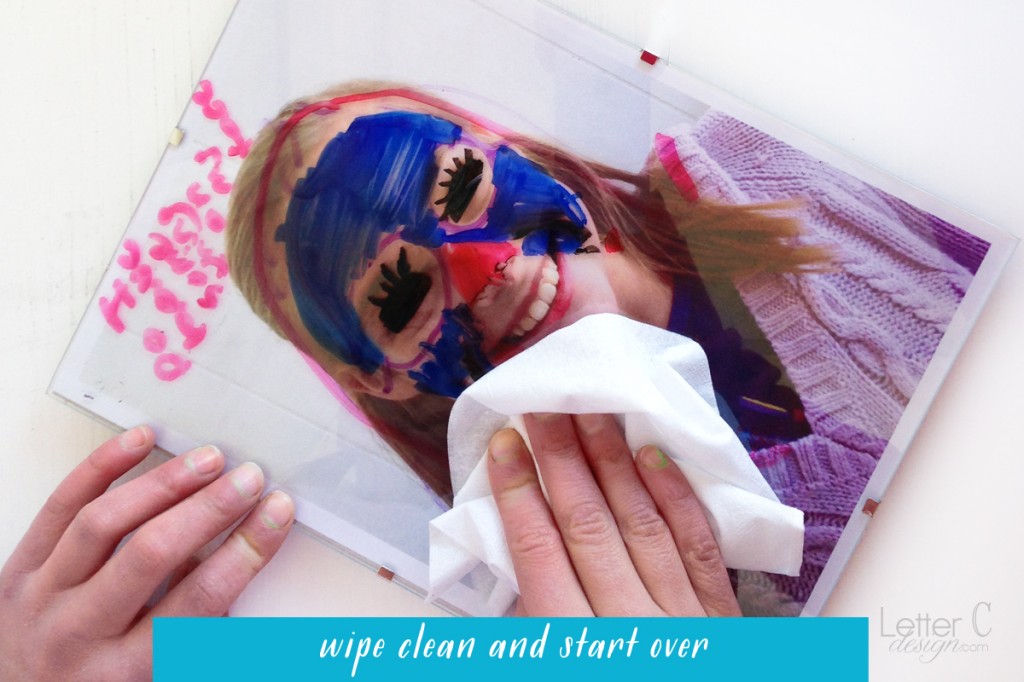 wipe the glass with a tissue and start all over again. 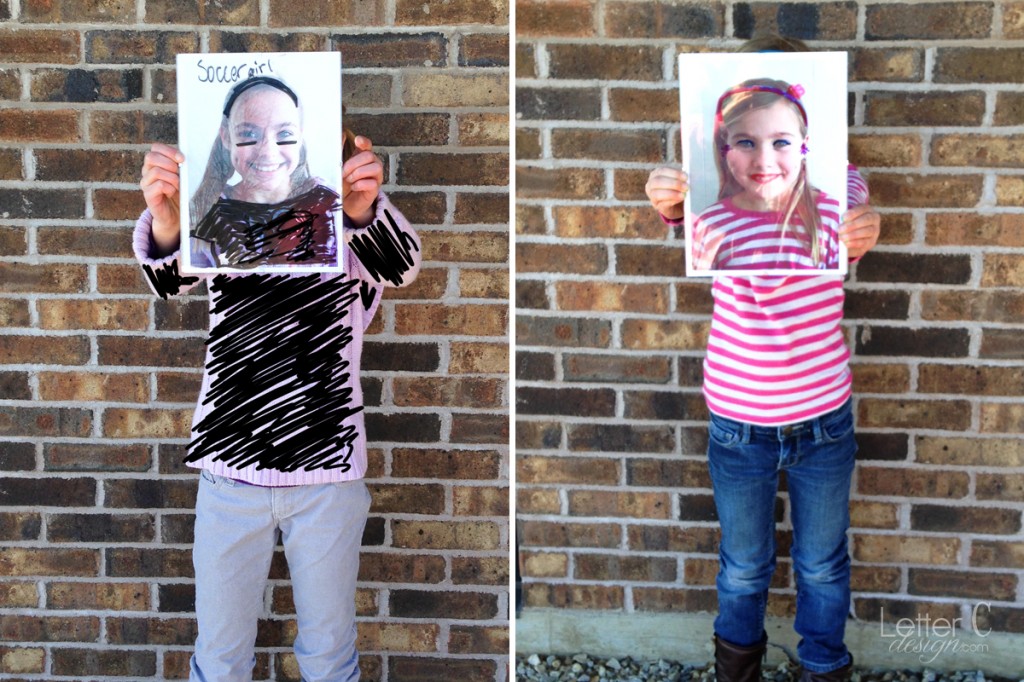 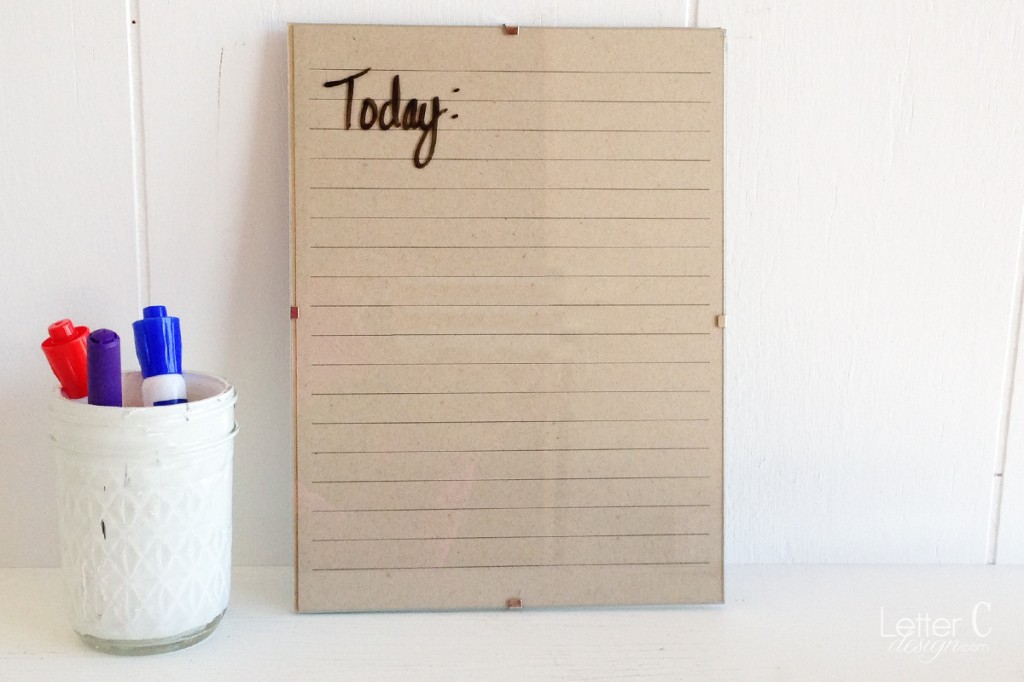 my frame – not as fun, but a little more practical.

my niece made me a mailbox from an unused box. she thought it would be perfect for the blog, so i had her write something and take some photos. here’s her post.

i am a big fan of art. i am so lucky to have a aunt who knows art. i made this mailbox for my aunt. we always write notes to each other when i am at the shop. hope you like it.  xoxo 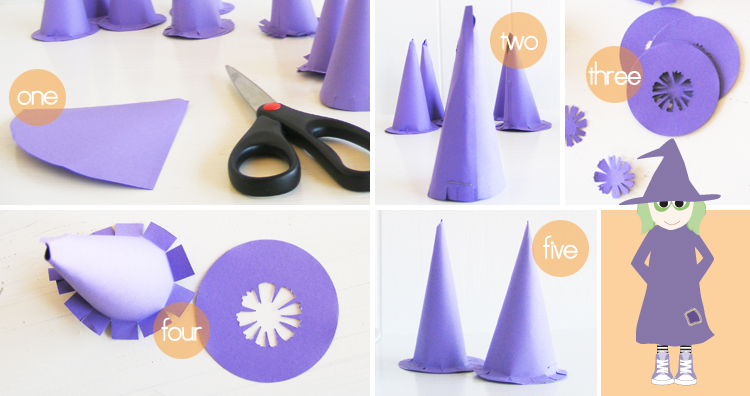 my niece is having a birthday party this weekend with her friends and just like her younger sister she is a party planner. this year she is having an orange & purple halloween themed party. for the craft part of the party they will be decorating mini pumpkins. my sister mentioned she was going to look for some mini hats for the pumpkins – but since my niece was sleeping over i said we could just whip some up. we didn’t have time last weekend, but today i went ahead and made some purple hats.

the hardest part of making these was figuring out how to make a cone. after some experimentation i figured they can be made from a quarter of a circle. so here is how to make a tiny witches hat.

one: cut out a circle 8.5″ in diameter and then cut out 4 quarters
two: add some glue to one of the straight sides of a quarter. hold the corner and roll it into a cone. this takes a bit of practice. i stapled the bottom of the cone to hold it into place while the glue dried.
three: make 2.5″ circles (i used a paper punch). inside that circle i used a flower punch for the stem to go through
four: cut little snips on the bottom of the cone and fold up the tabs
five: glue the cone tabs to the circles

now the girls can concentrate on painting and just top their little pumpkin with a hat.

when school starts I don’t get to spend too much time with my nieces and nephew, but this weekend the little one slept over. between going to soccer games and making pancakes we made this collaborative art project. it was a fun way to work together and now we both have a print as a reminder of the weekend.

it is simple and easy to do. all you need is some paper, a pencil, paint and google (to help find an animals that start with i and y). she would draw one letter/animal and then i would do the next. after we had all the letters drawn she painted my animals and i painted hers. after everything was created we scanned it in and added the names.

she made sure to sign and date it … she was even nice enough to give me a little credit too.